With the close of summer the time had come for us to close down the site.
So we donned the wellies again and picked up our buckets and spades, prepared for a hard morning’s work of backfilling.

But apart from one instance when Jane had to give Ruth a helping hand to extricate herself from the mud at the bottom of the slope, the job of backfilling went surprisingly quickly and easily.

The stone structure was already succumbing to mossy growth, and the intrusion of young weeds, so it was certainly time to give the site some protection again. 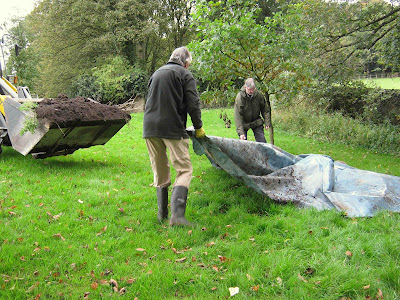 With the generous donation of a large pile of beautiful top soil provided by a neighbouring farmer, we took little more than a couple of hours to cover the site, leaving just the kerb stones exposed to indicate the location of the kiln – or bread oven – or whatever we decide it was. 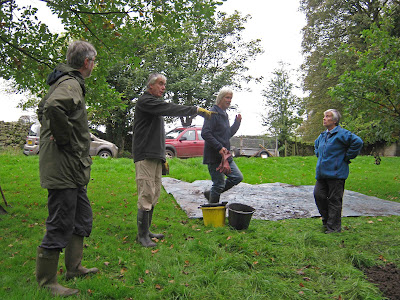 You missed a bit!
We had plenty of time to enjoy leisurely hot drinks and delicious hand-made Belgian chocolates from the village shop as we sat by Burnsall green, enjoying a quiet day with lovely views, in this normally busy tourist hotspot. Today, we just had the ducks for company. 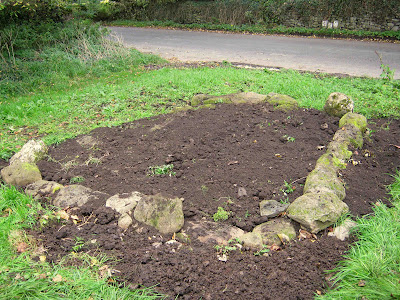 The structure covered over again
We await David's forthcoming research and report on the intriguing little Hartlington site with great anticipation.
Jane Lunnon, UWHG
Posted by Upper Wharfedale Heritage Group at 05:57 No comments:

An additional day with a small (but beautifully formed) workforce of Ruth, David, Peter and Alan. Bob was in a co-operative mood today so Ruth, Peter and Alan were quickly able to plot the co-ordinates of the significant parts of the structure and the position of the finds, David in the meantime did some final planning.

After partial backfilling © Alan Williams (elevated camera angle thanks to Peter!)
We then set about reinstating the removed stones to their previous positions, a bit like a giant jigsaw puzzle at times. The voids were then filled with soil and any loose soil was swept from the surfaces. Finally a tape "barrier" was placed around the site.

David wrapping the site up © Alan Williams
Alan Williams, UWHG
Posted by Alan at 08:07 No comments:

Having called yesterday off due to impending bad weather, David called the team out for Saturday, as the last day of the Hartlington dig. David and Ruth carefully lifted the big slab of stone lying in the middle of the structure, and as expected found the flue underneath. A rodent’s burrow had made a neat little runway across the mud to the back of the flue, and as we cleared away the infill, we found a nest of old leaves, and part of a tiny rodent skull.

In clearing away the mud, we hoped to find the point at which Cudworth had found the main flue branching off into two secondary flues, but there was no sign of that second flue. 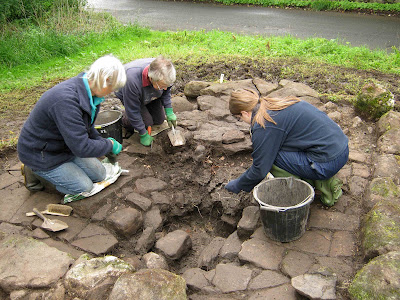 Instead, we found the clear line of one stone-lined flue running from under the hearth at the southern end, up to the back of the structure at the northern end. Here, we found further signs of burning in the reddened rocks. In several places inside the flue we also found significant amounts of charcoal and a few tiny pieces of coal.

After Jane took a photoshoot of the finished excavation, Ruth attempted to take some GPS readings with Bob the total station. 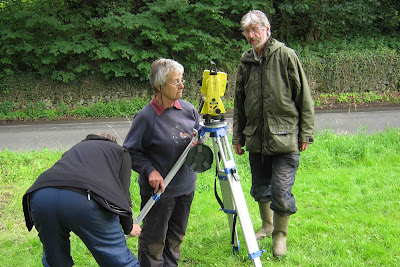 But he refused to play today, and it was decided to try again tomorrow, after a consultation with Roger.

So we packed up and congratulated ourselves on having enjoyed a really good dig – pleasant company, a successful outcome - despite the misgivings about interpretation of the structure – and good luck with the weather. We have also appreciated the interest shown every day by passers-by, and in particular, by local residents. Again, many thanks to Hartlington Hall for giving us some parking space, and to Hartlington Fencing Supplies for the use of their essential facilities!
The site will be left open for anyone to look at until we backfill at the end of the summer holidays. The edges of the structure will be left exposed and an interpretation board will be set up at the site.
Jane Lunnon
Posted by Upper Wharfedale Heritage Group at 07:52 No comments:

While Ruth and Jane finished off their planning left over from yesterday, the rest of the team began to trace out the flue, described by Cudworth and which was thought to run under the stone slabs in the centre. 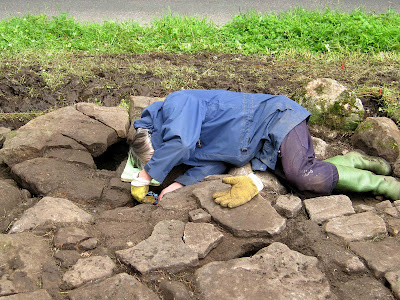 Alison and Jennifer started at the northern end, while Peter and Alan began digging in the centre. Pauline was kept busy with the various finds and David with the numerous interested visitors. As has been mentioned before, the road between Burnsall and Appletreewick is a very popular route for walkers and cyclists, not to mention passing cars, which regularly slowed down to have a better view. Excavation certainly promotes a lot of interest! 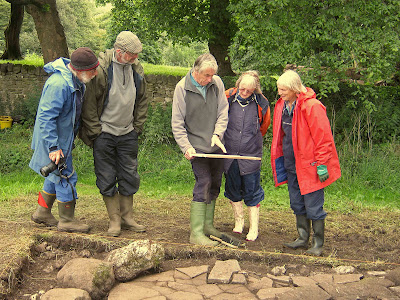 Having finished the planning, Jane and Ruth joined the flue cleaning team at the southern (lower) end, hoping to find the exit, and eventually proving that it was exactly as described by Cudworth.
The mud again caused great hilarity, especially as Alan slowly sank nearly up to top of his wellies as he stood to take the photographs! 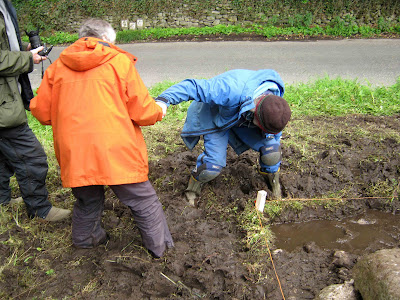 Stick in the mud! © Jane Lunnon

The general thought is that it must have been a communal bread oven – these used to be situated near to the mediaeval manor house, which in Hartlington is just across the road from the site. It is known that there was a communal oven in the ancient Parish of Burnsall, but nobody knew just where.

7 UWHG members joined David today for a big planning session, to draw the stonework of this increasingly intriguing structure on Hartlington Green; a task which took us all day. Although it isn’t our favourite job it does at least force us to examine and re-evaluate the site in detail. 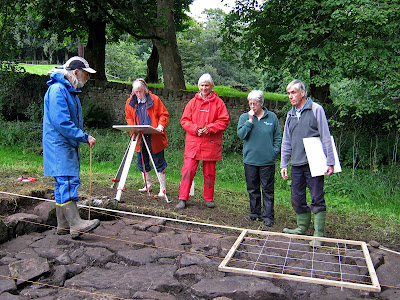 Passers-by, including local residents, tourists, cyclists and ramblers, proved very curious – we lost count of how many times we were asked: “Found anything interesting?” and “What have you found?” It’s gratifying that so many people show an interest. 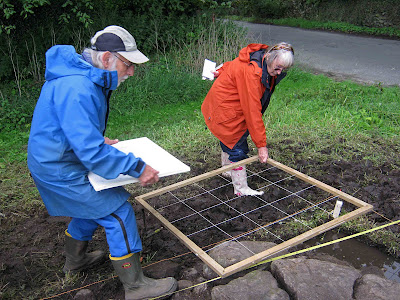 Besides, the more we look at this structure, the less likely does it seem to be a corn drying kiln. The relative position of the flues to the fire hearth, and the use of massive stone slabs across the floor, just don’t make sense. The currently favoured theory is this could be a communal bread oven, maybe, perhaps.

We were joined by three more UWHG members today, to continue digging around the outside edge of the structure on Hartlington Green. One of these was Jennifer, on her school holidays and currently waiting for her GCSE results. She had joined us a couple of weeks ago for the Chapel House Wood dig, and undeterred, is with us again for the dig at Hartlington. This is her blog for Tuesday:
Why do we dig in the most unlikely places?
I have only ever done two digs, this being my second and the first being at Chapel House Woods. What the future has in store for me I do not know, but
as to the past, all we seem to have found of it, is mud and oddly placed stones.(more to the point-What is it?) 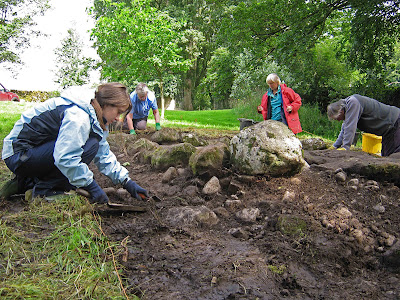 Hartlington is a completely different site to Chapel House Woods, (as I was forewarned)
It is smaller, public and much more localised. But still, does anyone know what it is yet?

Apart from the need for good, strong wellies the weather stayed fairly fine and a lot of passer-by’s were genuinely interested in the site. Although what the seven of us could tell them, was perhaps not what they expected. 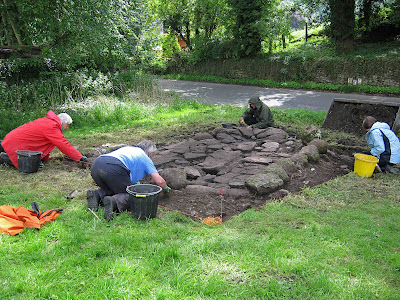 Digging here is more like gardening and the daffodil bulbs certainly proved that.
The site now has several explanations, some more realistic than others, (Bread oven, water feature, barbeque pit…)Never mind what it is, I think that we are all enjoying ourselves and that’s what counts
Jennifer Stearn
Posted by Upper Wharfedale Heritage Group at 00:09 No comments:

On the village green at Hartlington, near Burnsall, is a small stone-built feature that was first excavated in 1896 by a man called Cudworth. He concluded that it was a kiln but had no idea what type of kiln it might have been. It had been revealed by workmen who were clearing off centuries of general rubbish that local people had dumped there (early modern fly-tipping!). Cudworth left no excavation drawings, only one photograph and a rather generalised description.
The feature is described on the HER as a ‘medieval corn parching kiln’ 3.7m by 2.7m with visible foundation stones and in fragmentary condition.
The parish council and the YDNPA agreed that it should be investigated again to see if its structural integrity is still intact, and to see if its original purpose can be ascertained. 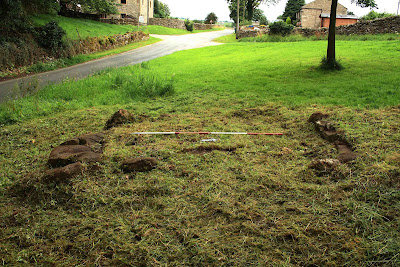 The site before excavation begins

Under the direction of Dr David Johnson, three members of UWHG turned up this morning to deturf and get this excavation under way. We were briefly joined by Dr Roger Martlew who set up the GPS fixed reference points for the site using the total station.

After a hard morning's work we had cleared away the top soil and revealed the stone work of the kiln. 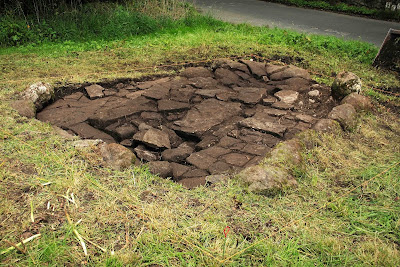 We spent some time discussing the strangeness of the structure, which doesn't at the moment seem to make much sense. It certainly isn't a Roman tile kiln as Cudworth had decided. Neither does it appear to be a lime or potash kiln. The most likely explanation does seem to be a corn drying kiln. But it's early days - let's see what happens as the excavation progresses. 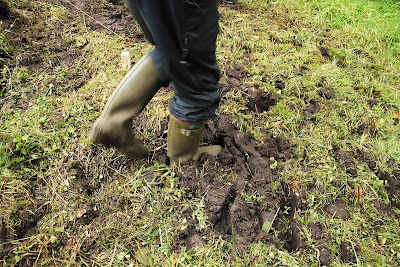 We are very grateful to local residents for car parking and toilet facilities. Very welcome indeed!